Why is Respiration essential for a quality life?

Carbon dioxide is the waste gas produced when carbon is combined with oxygen as part of the energy-making processes.  The process of taking air into the lungs is inspiration, or inhalation; while the process of breathing air out, including removal of carbon dioxide, is exhalation or expiration. Taking a breath of air is what you do 20,000 times a day or about 6 million times a year!  While reading this you have inhaled and exhaled; taking about 15 to 20 breaths per minute.  Most of us take breathing for granted until an illness or injury that damages our lungs or impairs our air transport passages, the latter often due to excess histamines.

Worldwide millions suffer from asthma, COPD, pneumonia, lung cancer and other respiratory health issues such as pollution and biotoxins that make breathing difficult even to the point of ceasing; especially as we grow older or become subject to a bioterrorism attack.

Asthma is suffered by 21.1 million and is caused about 80% of the time by excess histamines released into the body in an inappropriate allergic reaction that tightens and squeezes the airways to make breathing difficult.

Pollution, smoke, mold/fungus and allergens such as house dust and pet dander enter the body.  Coughing and wheezing result and asthma is present.  Asthma should be treated immediately by a physician if breathing is seriously impaired.  Recognize asthma literally attacks millions each year, particularly the elderly, with thousands dying from asthma attacks.

Chronic Obstructive Pulmonary disease, or COPD, refers to emphysema and chronic bronchitis where hardened scar tissue develops in the airflow in and out of the lungs.  15.3 million adults have COPD and and at present there is no known cure.

Pneumonia is a dangerous lung infection disease that can be deadly also; often requiring hospital care and due to pneumonia being a frequent complication of asthma and/or influenza.

Lung cancer is the leading cause of death in the United States.  If you smoke, you have increased your probability of lung cancer by 23 times for males and 13 times higher for women.  Simple remedy – Don’t smoke!  60,000 folks die of lung cancer annually and you don’t have to be in that statistic.

Airborne Bioterrorism is a serious threat with bioterrorism agents, often mycotoxins, released into the air to be breathed into the body or absorbed through the skin with killing or disabling capabilities. 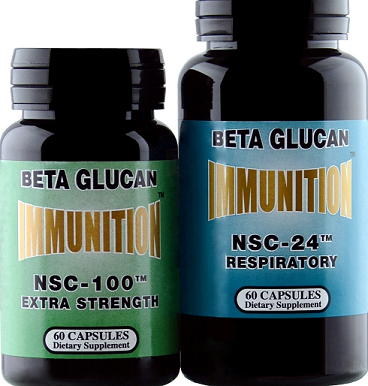 Buy the NSC Respiratory Package at 35% Discount or the individual NSC products purchased separately at a 15% Discount each by clicking on “Buy Now”.

These statements have not been evaluated by the Food and Drug Administration. These products are not intended to diagnose, treat, cure or prevent any disease.